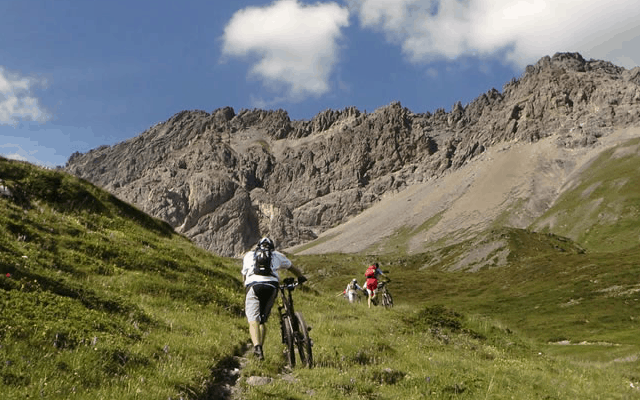 For many travellers the quintessential image of the Swiss region of Graubünden will be one of ostentatiously adorned skiers quaffing champagne with horses cantering across the white turf of Cartier’s Polo World Cup in the background.

But this – admittedly accurate – image of the Swiss canton’s most famous destination, St Moritz, represents a mere fraction of what is on offer here. The jetsetters are only in town for a few weeks over the Christmas and New Year’s holidays, while alpine serenity reigns supreme during much of the year.

The world famous ski resort of St Moritz is just one of a chain of 13 alpine villages running through the Engadin Valley, each of which has its own distinct charm.

Maloja, for example, is the destination of choice for visiting families, while Samedan prides itself on being the guardian of the local Engadin culture and Madulain – the smallest village in the region – is ideal for those seeking tranquility amid the highest mountain peaks.

But I was here for adventure. Basing myself in the village of Celerina during the summer season I wanted to explore what happened when the pistes were transformed into a verdant playground.

There had already been an early treat on my journey to the resort. The trip down from Zurich Airport had passed through parts of the UNESCO recognised Albula/Bernina railway, offering stunning views over the surrounding landscape. ‘Spectacular scenery’ is one of the most overused phrases in the travel vocabulary but this ride deserves all the praise it gets.

Breathtaking waterfalls gush through cracks in the mountain side, pouring down from the snow-capped peaks above as wisps of white cloud linger in the skies, creating a nearly fairytale image.

Such scenes are greeted with a nonchalant nod from Swiss commuters, but to the visiting tourist such sights can be virtually mesmeric.

In those very same mountains there are a host of activities on offer; including mountain bike treks along the valley. There are over 400 kilometres of track signposted around the mountains, and for those seeking a leisurely morning ride trips along the River Inn come highly recommended. After a quick consultation with the map I chose an adrenaline packed expedition around the Paradiso Loop.

The seven kilometre trip includes a descent through the Suvretta da Murezzan, but getting to the summit was far from easy. After just ten minutes my lungs were burning, with the peak appearing to lurch further into the distance with each fresh attempt to conquer it. But in less than an hour we had made it and from there on in it was literally all down hill.

Reaching speeds of up to 30 mp/h we covered the remaining distance in moments, haring round bends and coming dangerously close to the precipice on several occasions. An exhilarating experience made all the better by the alpine backdrop.

Check out Boom Sports, conveniently located closed to a mountain railway station, for equipment. Bikes can often be taken in gondolas offering an easy route to the top.

Lunch was at Berghaus Diavolezza – offering panoramic views from over 3,000 metres above sea level. The snow can come quick here and even in early September it was glacially cold, but the surprisingly high quality food – given the location – chased away the wintry weather. We had veal for the main course with wine and dessert for around CHF50 (£30) each.

It can be expensive reaching some of the summits by gondola, but guests staying for two nights or more at many of the hotels in the region will receive inclusive access to the 13 mountain transport facilities dotted around the mountain.

Lunch was followed by another trip down one of the higher slopes in the region, this time on an Alpine trottinett; a hair-raising experience to say the least.

Taking the gondola up to the Marguns station guests pay CHF15 (Â£9) for the privilege of throwing themselves down a dirt track on what is essentially a modified scooter – but trust me it is worth every centime.

These contraptions reached frankly unnerving speeds virtually instantly, propelling me down the side of the 2,273 metre high mountain at a velocity the envy of any skier; at times it seemed impossible I won’t career off the side.

Thankfully after a few minutes our troupe reached the bottom of the mountain without loss of life – or indeed incident – and seemed desperate to do it again.

Perhaps what is most worrying about the whole experience is that lunatics willing to hurl themselves down a mountain on a scooter can pay less if they are willing to do it without a helmet!

Those with more time on their hands might like to enjoy the watersports on offer in the region. Lake Silvaplana, for example, is revered by windsurfers,whereas sailors tend to head to Lake St Moritz, and the crystal clear glacial waters of Lake Champfer are perfect for anglers. Golf is also possible at one of three courses – during the summer months.

After a hard day on the mountains the peace of Celenrina was the perfect tonic. Staying at the Hotel Chesa Rosatsch proved a great option; offering a quiet alpine charm the hotel is built from wood throughout and is both warm and homely.

However, it is the exquisite dining which will likely keep guests coming back time and again. Chef Michael Zelger serves an Ã la carte menu in three authentic Engadine parlours, each with walls more then 300 years old.

A particular highlight is the venison. While deer are only hunted in the mountains around the village for a month each year the taste, served with wild berries, is divine and accompanied by an excellent cellar and surprising choice of whiskies the restaurant makes for a splendid evening.

So, it turns out there is more to life in St. Moritz and the Engadin Valley than champagne and polo, you just have to know where to look.

The airline operates daily flights from London Heathrow, London City, Birmingham and Manchester to Zurich with fares starting from £99 return, including all airport taxes.

Finally the Swiss Travel System provides a dedicated range of travel passes and tickets exclusively for visitors from abroad; designed for simple roundtrips to the airport, or lengthier stays taking in the whole country.