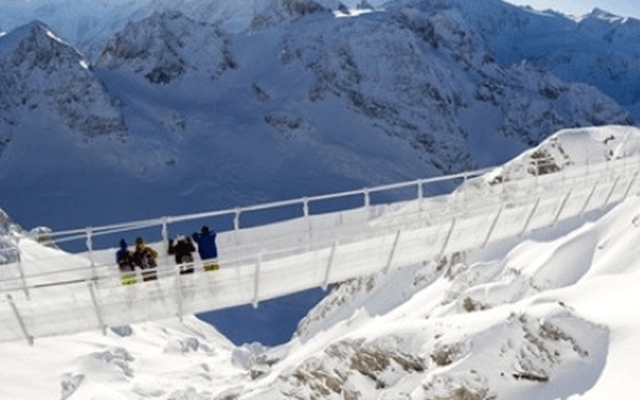 A bridge with a view

Do you enjoy an adrenaline rush? How about walking across the world’s highest suspension bridge at 3,020 metres above sea level?

Titlis Cliff Walk – a 330ft long walkway above the summit of Mt. Titlis in the Swiss Alps – opened on the weekend, offering adventure-seekers the chance to enjoy panoramic vistas of the Titlis glacier and the peaks of Central Switzerland beyond.

The suspension bridge reportedly cost £1m to build and is able to withstand the weight of 500 tonnes of snow and ice.

Due to be open both in summer and winter, representatives of the Titlis Engelberg region expect the walkway will be especially popular during the warmer months.

Ursula Beamish, a spokeswoman for Switzerland Tourism said: “It’s going to be really big next summer as a high-adrenaline kind of new adventure in Switzerland.”

The thrilling 3ft wide walkway above Mount Titlis was built to celebrate the 100th anniversary of the opening of a cableway which joined the towns of Engelberg and Gerschnialp in January 1913.