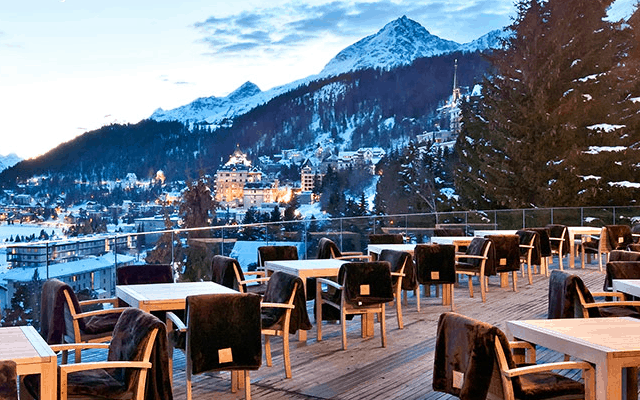 The Carlton Hotel certainly falls into the ‘great’ category

The Carlton Hotel, located in über chic St Moritz, is packed with character, the perfect place for a resort spotlight…

The Carlton Hotel’s stately stairway, decorative stucco work and eclectic furniture serve as a constant reminder of the glory days of the early 20th century (the hotel was built in 1913). In fact, the hotel underwent a complete refurbishment in 2007 and much of the furnishings are brand new. However, instead of steering completely in the contemporary direction, the hotel has embraced its past. We have the renowned Swiss interior designer Carlo Rampazzi to thank for this.

According to legend the property was originally planned as a summer residence for the tsar Nicolaj II., grand son of the tsar Alexander II. This has never been confirmed (it seems it was a fantastical story made up by the former owner of the Carlton to promote the hotel), but Rampazzi used this story as his artistic inspiration (which, in turn, is rather a clever marketing strategy).

Everywhere you look, you’ll spot details relating to this legend, such as the ornate Murano glass lamps and eclectic furniture (the tsar was obviously well travelled). The designers even went as far as to scuff a few walls; textured wallpaper revealing secrets of the hotel’s past. The result is really quite intriguing.

Of all the 60 suites, nearly all of them are different with each floor showcasing a different colour. My suite was a cool, calming pea green (compared to hot pink upstairs!) and delightfully spacious.

A nice feature is that all the hotel’s suites have south-facing views of the lake of St Moritz; a rare feat for all a hotel’s rooms to share the best vista. I had many an enjoyable hour sitting on my balcony, coffee in hand, gazing at the pristine, snow-covered Alps and lake below, which gleamed in the bright Alpine sun.

Like the rest of the hotel, the suites were full of character. The tiles in the bathroom were reminiscent of the iconic Parisian metro tiles and the furnishings were interesting and not standardised throughout the rooms (I loved the use of Murano glass). The more you looked around the suites, the more details you noticed.

My abode throughout my stay boasted a roomy bedroom and positively palatial en suite with walk-in shower, tub and ‘his and hers’ sinks. Features included a range of shutter and lighting options, full-sized Molton Brown products (no poxy sample sizes here) and a pot of turquoise bath salts. The only criticism is that it did take me a good 10 minutes to figure out how the bath plug worked; sometimes simple is best!

When coming in from a long day’s skiing, I found a little ultra-moisturising Molton Brown lip balm on my pillow, the spot where a ‘normal’ hotel, would pop a chocolate. Now that is an example of a detail which springs a hotel from the good to the great category.
One of the best features of the hotel is The Carlton Spa – the ideal spot to retreat to after a tiring day on the slopes. Spread over three floors, I spent my afternoons alternating between the extensive sauna and steam room, as well as the indoor and outdoor pools. There’s nothing like soaking in a hot Jacuzzi outside, with the hot steam slicing through the crisp air. The spa even has a peaceful relaxation room where you could snuggle up with a glass of iced tea.

Evenings were spent in the hotel’s restaurants: Restaurant Romanoff and Tschine. The executive chef of both restaurants Salvatore Frequente and his team create unfussy cuisine focused on a light and balanced approach to fine dining.

Restaurant Romanoff was slightly more formal and Tschine boasted a more relaxed atmosphere. I enjoyed both meals; the stand-out courses for me were the indulgent hazelnut éclair with pistachio ice cream, served in Restaurant Romanoff, and the Baby monkfish, pea puree and fava tomato vinaigrette in Tschine.

The hotel’s spread at breakfast was to die for. Every morning, I looked forward to my mini cooked breakfast with their selection of sausages, vegetables and potatoes which I followed with delicious Bircher museli and a generous portion of mixed fruits.

The Carlton Hotel certainly falls into the ‘great’ category. To make such a grand and extensive property feel homely, full of intrigue and character is an impressive feat.

We flew with Swiss Air to Zurich Airport. SWISS operates daily flights from London Heathrow, London City, Birmingham and Manchester to Zurich. Fares start from £115 return, including all airport taxes. For reservations call 0845 6010956 or visit: www.swiss.com.

We travelled via train to Engadin St Moritz. The Swiss Transfer Ticket covers a round-trip between the airport/Swiss border and your destination.Prices are £90 in second class and £145 in first class. Visit www.swisstravelsystem.co.uk.