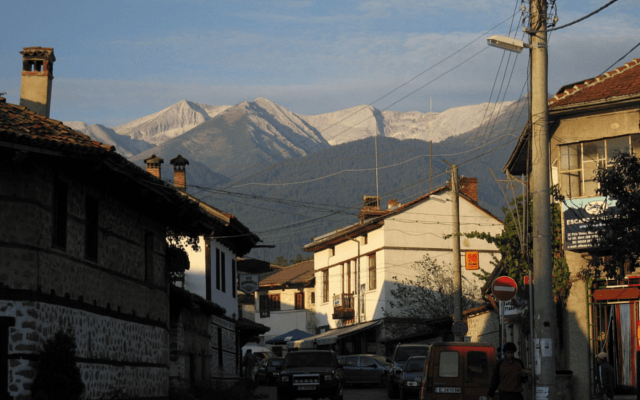 The town of Bansko, under the mountain, glows in spring sunshine.

If you’re looking for a ski resort that combines a fantastic mountain, a picturesque town at the bottom and fast, modern lifts to the top then Bansko in Bulgaria should be somewhere near the top of your list. Our latest reports suggest that the snow at Bansko is going to be excellent up to Easter and beyond, so as one of the cheapest ski resorts in Europe, it’s also a perfect spot for a late-season last minute holiday. 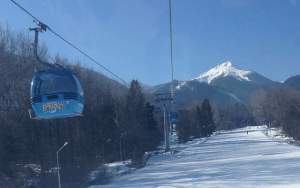 Bansko’s pistes have come a long way in the last 10 years – no longer accessible only by 4×4 or minibus, new gondola lifts can pull skiers up to Bunderishka while a floodlit blue piste goes back down to the town.

Once you’ve made your way to Bunderishka there are a pair of lift chairs ready to take you to the highest point of the piste. From this point you’ve the option of red and blue routes down to Shiligarnika or, for more experienced skiers, a red followed by a black slope (which we’ve heard isn’t too challenging compared to other blacks) back to Bunderishka. A number of slopes can also be found near the mid-way station of the gondola, again served by draglifts and quad lifts.

Despite a reputation for realiable snow beyond the Bulgarian norm, queues should be minimal for these facilities during the late-season period. A nursery area is available at the top of the mountain, taking care of children from the age of four to seven. Schools such as the Ulen and Pirin 2000 schools are available, with a high standard of tuition reported. 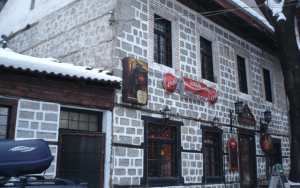 Bansko town is a charming, picturesque town once you make your way through the somewhat uninspiring-looking outskirts. The architecture in the town’s central square is of particular note, boasting a classic European look with white walls set off by orange-red tiled roofs. The town is ideal for those looking to avoid a typical tourist hot spot with little outward commercialisation beyond the hotels and restaurants that are dotted between the homes of locals and shops.

The nearby Pirin National Park offers numerous lakes and pine woods, making it a popular area for recreation all year round, while the nearby village of Banya boasts 27 thermal mineral springs that are prized by locals.

In terms of hotels a good place to start your look is the cluster near the gondola station, with the relatively newly-built Hotel Florimont offering its own casino if that should take your fancy. Alternatively, a number of hotels can be found near the town square such as Hotel Pirin and the traditional Kempinksi Grand Arena, which boasts a 5 star rating. Each of these hotels offers pool facilities as well as spa and fitness areas.

Lively bars and restaurants are available in the town, with traditional food being the most prevalent – expect classic Bulgarian cuisine (grilled meat a speciality), good wine and log fires. Don’t expect much in the way of nightclubs.

Flights are available to Sofia (the nearest airport to Bansko) from a wide range of UK airports with flights from London, Birmingham, Newcastle and Nottingham being direct. The cheapest flights this Spring and Easter time are those from London. While EasyJet, Wizz Air and Turkish Airlines are the carriers offering the best prices.

The Katarino SPA Complex has rooms available through late March and April, with prices for a single room sitting at around €50 from bulgariaski.com. 5km from the Bansko resort in the town of Katarino the hotel features swimming pools, fitness and sport facilities as well as an on-site restaurant and tavern.

Limited rooms are also available at the Kap House Hotel for only £19 courtesy of Booking.com. Only 100 yards from the first cabin lift station on Bansko’s main street. Expect cable TV as well as free usage of the indoor pool, hot tub and sauna.

Our final recommendation is the Cornelia Boutique Hotel, positioned between Bansko and Razlog. En-suite rooms and self-catering apartments are both available, starting at around £22 per night. The hotel is prized for its ‘wellness’ facilities – a steam bath, sauna and massage parlour. The ski resort is easily reachable by a 10 minute drive but the hotel also operates a free shuttle to and from the Gondola cable car.