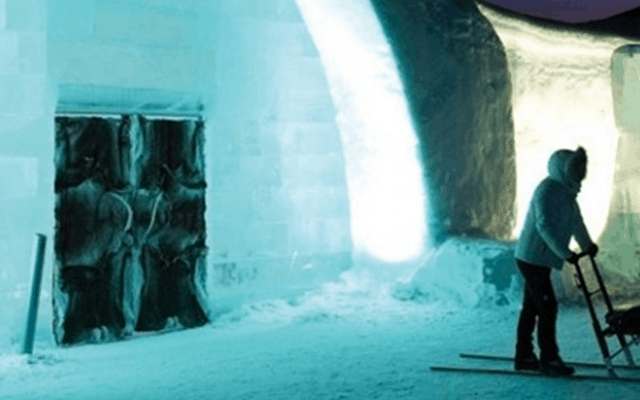 Fancy staying somewhere that really captures the spirit of winter? For a break away you’ll never forget, book a trip to one of the world’s top five ice hotels:

This is the original ice hotel and the world’s largest hotel made of ice and snow (over 5,500sqm). It is built afresh every December with ice from the Torne River in Jukkasjärvi, northern Sweden, 200km north of the Arctic Circle.
Sleep on ice blocks covered in reindeer skins in -5°C temperatures. The rooms are decorated with artwork and the furniture is all sculpted from ice.

Swedish Lapland is also Santa’s homeland, with fairy-tale landscapes, Christmas attractions and magic in the cold, cold air. It also claims to be one of the best areas in the world to see the elusive Northern Lights.

The stunning Ice Hotel by Romania’s Balea Lake, with a backdrop of The Fagaras Mountains, is rebuilt every year – so no two years are the same. If you’re looking to get away from it all, then you’re in luck as Ice Hotel Romania’s location is seriously remote; at over 2000m can be reached only by cable car in the winter, making it an exclusive 10-14 room hotel. The designers use sculpture and lighting to create a unique style and temperatures are held at -2°C (it can drop to -20°C outside!). Guests stay cosy inside with animal skins, blankets and sleeping bags.

Have a drink in an ice cube glass at the hotel’s super-cool ice bar decorated with hand-carved ice sculptures inspired by leading Romanian artist, Constantin Brancusi. There’s even an Ice Chapel for marriages or vow renewals.

While you’re there explore the charming capital of Bucharest, take an excursion to Bran ‘Dracula’s’ Castle and sky at Poiana Brasov.

The Ice hotel in Canada’s Quebec is constructed in a beautiful park just a few minutes from downtown Quebec City and claims to be the most accessible ice hotel in the world.

With 36 rooms and theme suites, the Hôtel de Glace offers lots of ways to experience the incomparable thrill of a night spent inside an ice hotel. Experience igloo life in a simple, but spectacular, room (protected from the cold by thick fur pelts) or opt for a themed suite, complete with a fireplace, allowing you to enjoy the fascinating interplay between fire and ice. You can even get married in one of the most spectacular ‘Ice chapels’ on earth!

Norway has not one but three ice hotels (well, one ice hotel and two ice lodges). The Kirkenes Snow Hotel is in the eastmost town of Norway, close to the Norwegian-Russian border and boasts 20 individually decorated rooms and the largest snow dome in Norway.

The Ice Lodge is one of the largest in Norway and part of the Bjorligard Hotel. It has a longer season than most ice hotels because of its altitude (1,250 meters above sea level). The ice hotel is situated by the banks of the Alta River on the edge of the Arctic Circle and its interior and exterior are made entirely out of ice and snow. Inside the ice hotel you’ll find majestic sculptures of Norwegian wildlife and  ice chandeliers hanging from the ceiling.

The Sorrisniva Igloo Hotel in Alta has been rebuilt yearly since 2000. It is Europe’s northernmost ice hotel, as it is located in the Finnmark region and is approximately 250km from North Cape. The 2,000-square-metre hotel has 30 rooms, including two suites and it is decorated with ice sculptures and ice furnishings, including lighting systems which enhance the different types of crystalline formations.

Closer to home you’ll find the uber-cool Ice House hotel in Ireland’s County Mayo perfect for a Christmas break with a difference. Okay it’s not actually made of ice but you can sip an Icicle cocktail in one of the outdoor hot tubs overlooking the River Moy and enjoy deluxe accommodation with floor-to-ceiling panoramic views.

This show-stopping hotel has a luxurious Chill Spa to make you forget the Christmas hustle and bustle. And enjoy a winter walk along some of Ireland’s finest beaches close to the hotel.