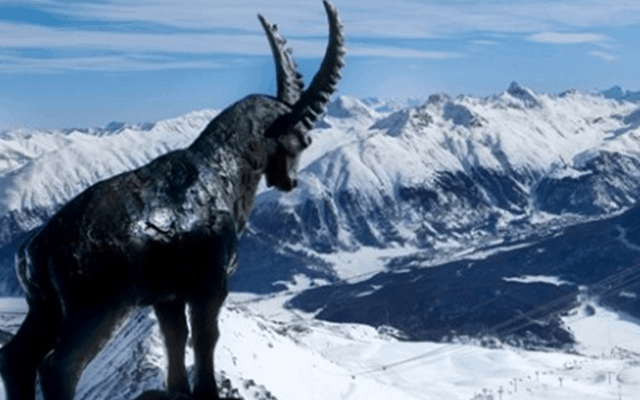 Whether you want to drink champagne or ski in a champagne climate, St Moritz is for you!

Bobsleighing, White Turf races and skiing in a champagne climate; the active adventures of winter in Engadin St Moritz.

I climbed into the compact metal tube of the bobsleigh, clenched the handrails with fervour and took one steady breath before the breakman hurled himself in and we were off down the snaking, icy track of the Olympia Bob Run.

The rumble of the bobsleigh passing over the compact ice gradually got louder as the bobsleigh picked up speed until it was a loud roar in my ears; the bobsleigh hurling round the track at meteoric speeds of up to 85mph, clinging to the steep contours of the ice at forces of up to 4G. 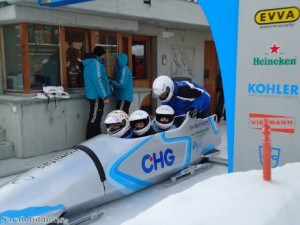 After 75 seconds, the bobsleigh scraped to a halt at the end of the 1,722m run and I clambered out, still slightly shaky with adrenaline. What a rush!

I had just experienced the oldest bobsleigh run in the world – as well as the only completely natural ice track in existence. Built in 1904 by the British, the track is rebuilt every year by hand by over a dozen specialised technicians and has played host to two Winter Olympic Games as well as 23 World Championships.

The neighbouring Tobogganing Club which overlooks the Cresta Run (which is terrifying even to look at) is still a fiercely British affair (and men only). Founded in 1885, it is as traditional as it gets; I even saw someone hop on a toboggan dressed entirely in tweed!

The Cresta Run, unlike the Olympia Bob Run, has shallower sides and rather than having the safety of a metal bobsleigh cage, hardy adrenaline-seekers take on the three miles of ice in a head-first position, lying on a skeleton toboggan that only reaches mere inches off the ice. One thing is for certain: you have to have nerves of steel!

The predominantly British history of tobogganing in St Moritz mirrors the history of the area itself. Legend has it that in 1864 hotelier Johannes Badrutt made a daring bet with some of his English summer guests: he promised them heaven on earth – in winter.

Summer tourism was already thriving when he made this bet and he claimed that if they weren’t able to enjoy the mild Engadin sunshine on his terrace in their shirtsleeves, he would reimburse all their travel costs. The guests then came back at Christmas…and didn’t leave until Easter (and as promised – with a great tan and plenty of happy memories).Thus, winter tourism in St Moritz was born. International fame and interest came when adventurous Brits built the Cresta Run in 1885 and the rest, as they say, is history. 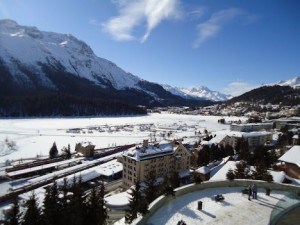 Winter in St Moritz will always be associated with skiing, and what great skiing it offers. I spent my time carving through wide, perfectly-groomed pistes, stopping every once in a while to admire the glorious view of the snow-capped Alps and ice-covered lakes. Luckily I was blessed with bright, sunny weather.

The slopes seemed to be relatively quiet (I am used to hordes of skiers and snowboarders covering the slopes like ants). It was partly due to the off-peak period in which I was here, but also due to the nature of the resort. Engadin St Moritz is made up of various snow sport areas – of which Corviglia and Corvatsch are probably the most well-known – and boasts over 217 miles of pistes. This was what was so great about skiing here – at times you felt like you were the only person on the mountain.

At the top of one of the slopes, I noticed the air glistening and shimmering in the sun. I commented on it to my guide and was told that I was experiencing the ‘champagne climate’ – the sparkling atmosphere of upper Engadin, which is characterised in winter by exceptionally dry and clean air. It was really quite beautiful and seemed rather an apt climate to have considering St Moritz’s clientele (‘cava climate’ doesn’t quite have the same ring to it!).

At lunch we stopped at the slope-side restaurant El Paradiso – arguably one of the most stylish alpine huts in the world. At 2,181 metres above sea level, El Paradiso offers modern cuisine with a blend of Engadine, Italian and French influences in a chic and stylishly-designed setting. The best part? It had to be the incredible panoramic views you could enjoy while tucking into your food.

We dined on a selection of canapés, from parma-ham wrapped dates to a delicious beetroot and salmon concoction served on a spoon, followed by a hearty main course of beef with pizzoccheri – a cheesy, pasta dish (an Engandine speciality). Dessert was a mountainous Dream Cream pastry (pictured above). I had to agree with the restaurant’s slogan ‘Close to Heaven’; it could not have been a better afternoon. 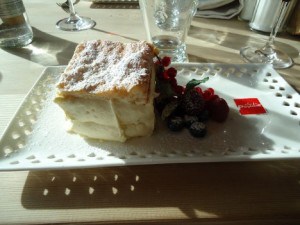 St Moritz is also home to a variety of unique, adrenaline-packed events. From the beginning of December until mid-March, one event follows another. None is more famous, however, than the unique White Turf races on the frozen Lake St Moritz (pictured left) – the social highlight of the season. A tradition since 1907, the event sees horses and their jockeys thundering round a track on the icy lake. Races include flat races (just horse and jockey) as well as the world’s most exclusive skijoring race, in which skiers are pulled by riderless thoroughbreds at terrific speed across the frozen lake.

There can’t be many other winter destinations which boast quite the variety of activities that Engadin St Moritz offers, from shopping and relaxing in a spa to bombing down the Olympia Bob Run. One thing is for certain: I’ll be back.

How to get there:

We flew with Swiss Air to Zurich Airport. SWISS operates daily flights from London Heathrow, London City, Birmingham and Manchester to Zurich. Fares start from £115 return, including all airport taxes. For reservations call 0845 6010956 or visit: www.swiss.com.

We travelled via train to Engadin St Moritz. The Swiss Transfer Ticket covers a round-trip between the airport/Swiss border and your destination. Prices are £90 in second class and £145 in first class. Visit www.swisstravelsystem.co.uk.